Kitrion Lighthouse: A unique monument that must be saved and highlighted

Hard to reach, but worth a visit… 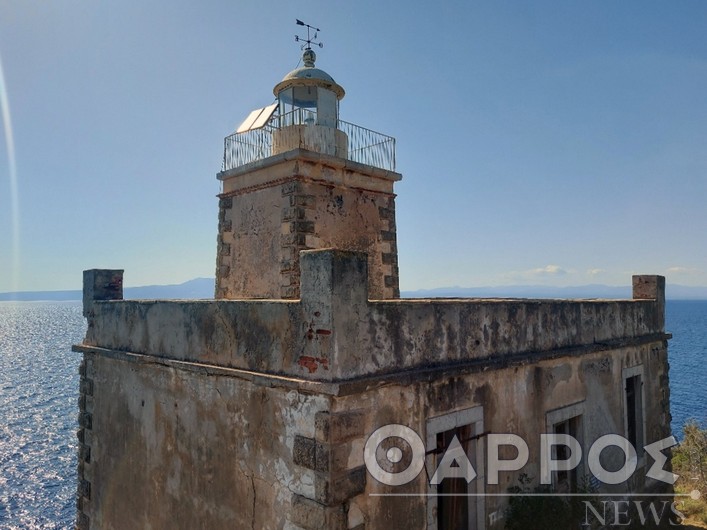 One of the most imposing and oldest lighthouses in Messinia is that of Kitria, which many may have heard of, but few have managed to visit.

The reason; Mainly because it is difficult to locate it, since the path, as well as the instructions, are almost non-existent, while to reach by sea you need a boat.
After two failed attempts in the past, we managed to get there on Sunday afternoon thanks to the help of the Greek Explorers Facebook group, whose members took the initiative on Saturday to go to the lighthouse and even place it on the route they found signs ( blue bags).

From the moment we posted photos of the lighthouse on social media, many asked us where it is and how one can visit it.
However, it is not easy to give instructions on how to reach someone who does not know the area at all, as he has to move on a dirt road and then find the valuable signs of the members of the Greek Explorers team.
In particular, it must follow the route to Kallianeika and before the village (from the side to Kitries) turn right. Then he has to continue and locate the small church of Agios Dimitrios (it is also on google maps). There he can park his vehicle or continue with it up to a point. The total distance to the lighthouse is 2 km. 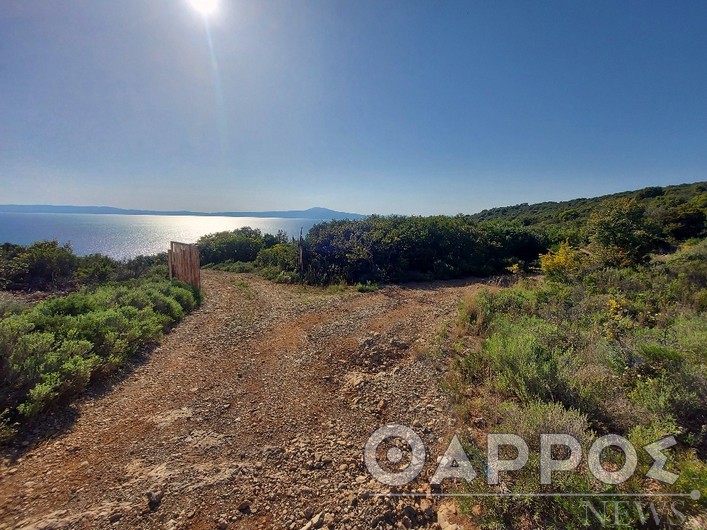 And somewhere there, then, begins the confusion: Right or left? How low is it? Then again a crossroads, and then you come across a grid: do you cross it or not?
And before one enters the long route, one must find it, with the lighthouse not visible from above.

These days and unknown to what extent, there is marking, as mentioned above, by team members. Obviously, it will not last long, so something must be done to highlight this historic and valuable monument.
We are writing history, because it is a building built in 1892, while when you see it, you will definitely be impressed.

The most important problem, however, apart from how one will get there, is the condition of the building. As is clear, it is left to its own devices, with the dangers for both visitors and its future being obvious. 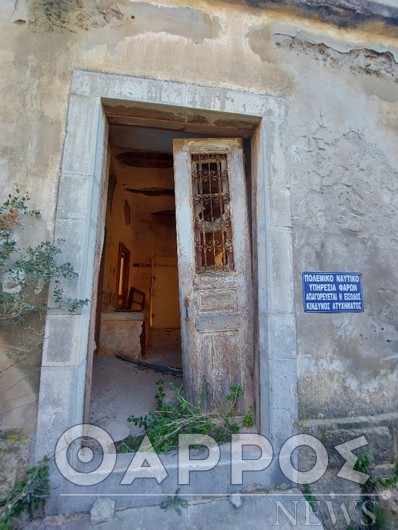 It should be noted that, according to a sign that exists at the point, it belongs to the Navy, to the Lighthouse Service, while "entry is prohibited, risk of accident".
The building may belong to the Navy, but from our side we believe that local agencies should save the lighthouse… And if they deem it appropriate and feasible, make it visitable, for the first time putting the appropriate markings.
Finally, to point out that the place is impressive and worth visiting, but under certain conditions, ie to have the right equipment, the right company, etc., since the risk of losing or not finally finding the lighthouse is more than visible.
It should also be noted that the Greek Explorers team created an excellent video for this lighthouse with the route, but also what one will see getting there…

The history of the lighthouse

According to the website faroi.com, this particular one was built in 1892. The height of its tower is 11 meters and its focal height is 31. It is located at the cape of Kitria in the Messinian Gulf. At first it operated on oil and its brightness reached 10 nautical miles.
During World War II, part of it was destroyed and remained extinct until 1945, when it was repaired and rejoined the Greek lighthouse network.
In 1953 it started operating with electricity, until in 1999 it was fully automated and now operates with solar energy.
Today it radiates every two minutes with a white beam of light every 12 ”and radiation of 7 nautical miles.

We spoke with Vassilis Spyris, Sotiria Bazani and Nikos Kozompolis, who, as they told us, set up the Facebook group to highlight places in our area and give instructions on how one can visit them.